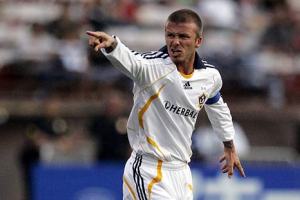 LA Galaxy chief executive Time Leiweke has said that he wants David Beckham to finalise his loan deal before the club enters the MLS play-offs.

Beckham is almost certain to return to Europe but Leiweke wants the deal done so it does not interfere with the Galaxy’s pursuit of the MLS Cup.

Leiweke said that the team would like to sort out the whole matter, for Beckham and for Galaxy and that he does not want any confusion.

Leiweke also added that it is the same with Landon Donovan as there is a lot of rumors of whether he is staying or going. Leiweke Said that the club will clear that up in the next two weeks as he wants the team to be focused.

It is believed that David Beckham is keen on a return to AC Milan where he enjoyed a successful stint last season and Leiweke says he is happy to let the 34-year old pursue his dream of being selected for Fabio Capello’s England World Cup squad.

He added that he talked a lot David Beckham because he wanted to make sure Beckham did not get down and that it would work out.

He also said that Galaxy have a deep appreciation of what Beckham is doing over here with his national team and that he wanted Beckham to know that he has the club’s support.

He also said that Galaxy is honored to have a player of Beckham’s magnitude playing at the World Cup.

He also said that the team will have four or five of its players at the World Cup and that is real progress for the league and team.