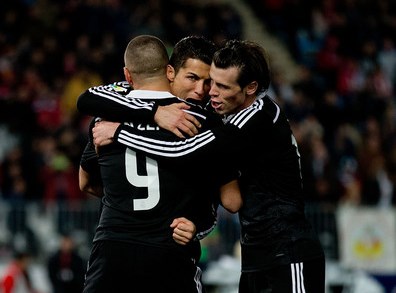 Real Madrid recorded their 20th successive win in all competitions, with Gareth Bale, Isco and Cristiano Ronaldo all finding the net in a 4-1 victory over Almeria. 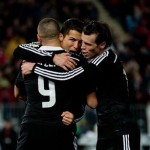 The result means Carlo Ancelotti’s side have extended the Spanish record for successive wins, while closing in on the world record of 24 before they head off to the Club World Cup in Morocco next week.

However, Almeria caused Los Blancos problems in the first half, as the away side struggled to find their rhythm. Isco gave Real the lead after 34 minutes, only for Verza to level the score with a wicked strike into Iker Casillas’ net soon after.

Yet the visitors regained their lead just moments later, when Bale powered a header home to give Real Madrid a narrow 2-1 lead heading into half-time.

And Ronaldo took his goal tally for the season to 32 with a late double, finishing off attacking moves sparked by team-mates Karim Benzema and Dani Carvajal as Real secured yet another landmark win to go five points clear at the top of La Liga.