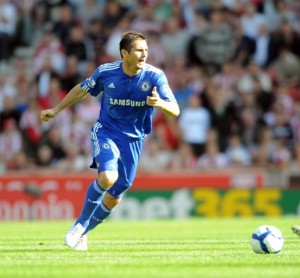 Chelsea and England international midfielder Frank Lampard has revealed that it will be business as usual when his club takes on Liverpool on Sunday.

The Blues were less than convincing during their 1-0 win over Apoel Nicosia in the Champions League last night and that display came on the back of the 3-1 defeat at Wigan but Lampard is backing the Blues to silence the critics who are beginning to doubt their championship credentials.

Lampard, now age 31, said that it will be a big game on Sunday and he does not know why people are saying that the Chelsea players are not clicking.

Lampard also said that Chelsea have only lost one game this season and that the lost was against Wigan because the team did not play well there at all.

However he said that the win against Nicosia is what that counts and that if Chelsea were seen over the season, they have clicked together as a team.

The midfielder added that Chelsea try to win every game and when they don’t win, the players just try harder in the next match.

Lampard also said that the confidence was not knocked at Wigan and that the players can’t afford not to believe in themselves or their team-mates.

However Lampard said that Chelsea will have to do better against Liverpool as they will be up for it and that they are a big club.

The England international midfielder said that the Chelsea players will have to respond again when they play Liverpool.