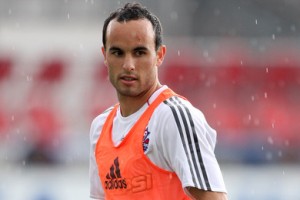 Everton loanee Landon Donovan has revealed that his short-term stay could be extended.

The 28-year old LA Galaxy star is almost at the end of his initial deal with the Toffees but after the 5-1 demolition of Hull City on Sunday in which he scored, Donovan said an extension was on the cards.

Donovan told reporters after the game that first of all, winning was important and it is nice to get a goal.

The USA international then said that there is a chance of staying and that everyone will know more this week.

He then said that if that was it then he is happy and maybe he can stay a little longer.

Donovan added that the fans and the people and the players at Everton are fantastic and that he has enjoyed his time at Goodison Park tremendously.