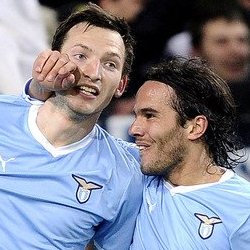 Ten-man Lazio pulled off a superb second-half comeback to beat Cesena at the Stadio Olimpico.

The hosts trailed 2-0 at half-time and were a man down after Abdoulay Konko was sent off in the 33rd minute, but goals from Hernanes, Senad Lulic and substitute Libor Kozak denied Cesena their first ever league win in Rome.

Cesena had gone in front in the 14th minute through Adrian Mutu, who then earned a penalty after being fouled by Konko, who was shown a straight red.

Vincenzo Iaquinta, making his debut with Cesena after joining the club on loan from Juventus last month, converted the penalty to put his team 2-0 up after 33 minutes.

Lazio then struck three times to claim maximum points and lift them above Udinese and into third place.

Udinese, who are one point behind the Romans, host AC Milan on Saturday.


Gerard Pique : Guardiola Is More Motivated Than Ever!