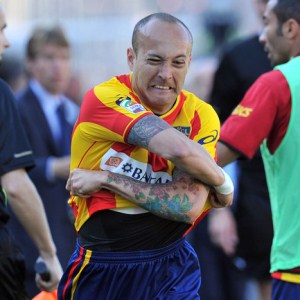 Javier Chevanton’s controversial strike two minutes from time lifted Lecce to a key victory in their fight for survival at the foot of Serie A.

Chevanton’s late goal – only awarded when the referee overruled his assistant’s original decision not to give it – settled a fiery encounter in which both sides had a man sent off in a dramatic second half.

Daniele Corvia opened the scoring for the hosts from the penalty spot on 49 minutes but the same player received his marching orders for a second yellow card just five minutes later.

Giuseppe Mascara pulled the sides level on 67 minutes and with 16 minutes remaining Edinson Cavani made it 10 men apiece as he, too, saw red for a second booking.

The entertaining contest looked set to end in stalemate until Chevanton’s dramatic late intervention, and Lecce will now be hoping Sampdoria draw a blank in their late kick-off against Genoa to ensure they remain above the drop zone heading into the final two games of the season.

The result also had implications at the other end of the table, with defeat dealing a blow to Napoli’s hopes of pipping Inter Milan to the runners-up spot in the final standings.