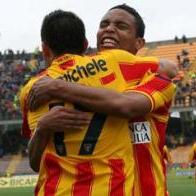 Roma’s bid for a Champions League qualifying spot suffered a blow as they slumped to a 4-2 defeat at relegation-threatened Lecce today.

Luis Muriel put Lecce ahead in the 22nd minute before David Di Michele doubled his team’s lead before the interval.

Muriel added his second shortly after the re-start before Di Michele made it 4-0 from the penalty spot before the hour mark.

Roma reduced arrears with strikers Bojan and Erik Lamela scoring late in the game but it was too little too late for the visitors.

The result at the Via del Mare stadium has left Roma in sixth place, four points behind Lazio, who are third and hold the last Champions League qualifying spot.