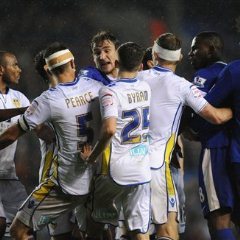 One of the favourites to lift the Capital One Cup bit the dust at the third-round stage tonight as in-form Everton were shocked by Championship side Leeds at Elland Road.

A flying start to their Premier League season had seen David Moyes’ third-placed side installed as one of the frontrunners to lift this trophy, but Aidy White’s fourth-minute goal and Rodolph Austin’s effort with 20 minutes left saw Leeds through, despite a nervy ending prompted by Sylvain Distin’s header.

The performance of Austin – a Jamaica international who has spent most of his career in Norway – was at the centre of Leeds’ victory, with the midfielder coming out on top of his battle with another man mountain, Marouane Fellaini.