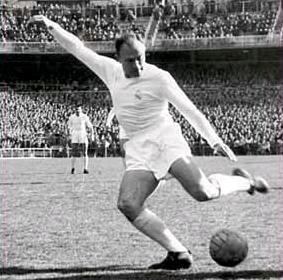 Alfredo di Stéfano Laulhé was born on the 4th of July 1926 in Barracas, Buenos Aires and is an Argentine – Spanish former international footballer and coach. He is most associated with Real Madrid and was instrumental in their domination of the European Champions’ Cup during the 1950s, a period in which the club won the trophy in five consecutive seasons from 1956. Di Stéfano played international football mostly for Spain, but he also played for Argentina and Colombia

Di Stéfano, nicknamed “Saeta rubia” (“blond arrow”),and he was a powerful forward with great stamina, tactical versatility, and vision and he could also play almost anywhere on the pitch. He is currently the 4th highest scorer in the history of Spain’s top division, and Real Madrid’s 2nd highest league goalscorer of all time, with 216 goals in 282 league matches between 1953 and 1964.

In November 2003, to celebrate UEFA’s Jubilee, he was selected as the Golden Player of Spain by the Royal Spanish Football Federation as their most outstanding player of the past 50 years. He was named by Pelé as one of the “top 125 greatest living footballers” in March 2004. Di Stéfano was voted fourth, behind Pelé, Diego Maradona, and Johan Cruijff, in a vote organised by the French weekly magazine France Football consulting their former Ballon d’Or winners to elect the Football Player of the Century. It is, however, noteworthy that Pele himself declared George Best to be the greatest ever footballer.

After retirement, he moved into coaching. He guided the Argentine clubs Boca Juniors and River Plate to league titles, and won La Liga and the Copa del Rey with Valencia as well as the European Cup Winners’ Cup with the side in 1980. He also managed Sporting in the 1974/75 season and Real Madrid between 1982 and 1984.

Alfredo Di Stéfano currently resides in Spain. On 5 November 2000 he was named President of Honour of Real Madrid.

On 24 December 2005, 79-year-old di Stéfano suffered a heart attack, but made a full recovery.

Alfredo Di Stéfano once said of Diego Maradona “Technically, on an individual basis, he is far superior to me in what he can do with a ball; my ability to cover an entire field and versatility is what I hold over him, though with the right training he could easily do the same.” 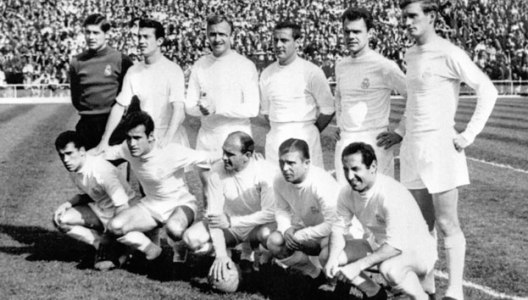