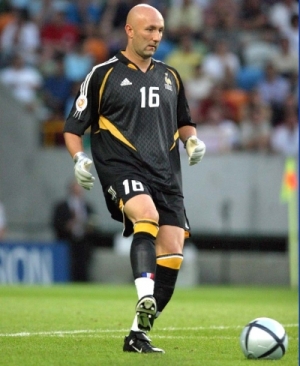 Fabien Alain Barthez was born on the 28th of June 1971 in Lavelanet, France and is a former French international football goalkeeper who won honours with Manchester United and the French national team, with whom he won the 1998 FIFA World Cup and Euro 2000 and reached the final of the 2006 World Cup.

He shares the record for the most World Cup finals clean sheets with Peter Shilton, with 10. Professionally, he has kept goal for his clubs to a Champions League title and several Ligue 1 and Premier League titles.

On 8 August 2006, Barthez announced he was still hoping to play professional football for another two years, insisting he was also looking to continue his career in the French international setup. His ideal scenario would be a return to first club Toulouse, where he could be close enough to allow him to take care of his sick mother. But he said if he did not have a club by 31 August he would not carry on with football. On 5 October 2006 it was confirmed that he had retired from football, having failed to agree a return to Toulouse. Barthez commented: “The only club I wanted to go to was not so happy to have me. It happens and you have to live with it.”