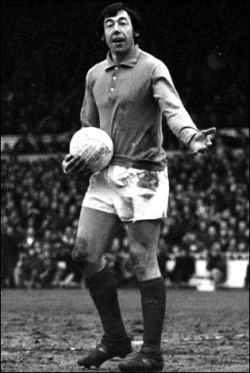 Gordon Banks, OBE (born 30 December 1937) is a retired English footballer, elected in a poll by the IFFHS as the second best goalkeeper of the 20th Century – after Lev Yashin (1st) and before Dino Zoff (3rd).[1]

Banks was a member of the England national team that won the 1966 World Cup. Banks was named by Pelé as one of the top 125 greatest living footballers in March 2004.

On Tuesday 9 May 2006, Gordon Banks was the first “legend” to be inducted into a new Walk of Fame, by having a plaque installed in the pavement in front of the Town Hall. Banks made a speech to an attendant crowd as to how thrilled he was to be given this honour. The plaque is made of bronze, and is a star set in a circle with a blue background, and the words “SHEFFIELD LEGEND” GORDON BANKS OBE. FOOTBALLER.