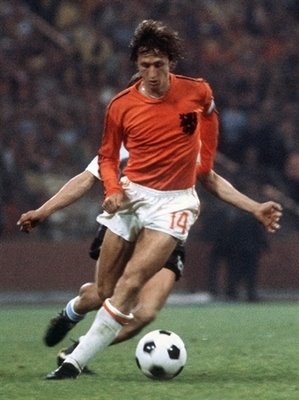 Hendrik Johannes Cruijff was born on the 25th of April 1947 and is commonly known as Johan Cruyff. He is a former Dutch international footballer and manager. He was named European Footballer of the Year three times (1971, 1973, 1974) which is a record jointly held with Michel Platini and Marco van Basten. Cruyff was the most famous exponent of the football philosophy known as Total Football, explored by Rinus Michels.

After his retirement from playing in 1984, Cruyff became highly successful as manager of AFC Ajax and later FC Barcelona and he remains as an influential advisor to both clubs. His son, Jordi, also went on to play football professionally.

Cruyff was known for his technical ability, speed and acceleration, but his greatest quality was vision, based on an acute sense of his team-mates’ positions as an attack unfolded. The sports writer David Miller believed Cruyff superior to any previous player in his ability to extract the most from others. He dubbed him “Pythagoras in boots” for the complexity and precision of his angled passes and wrote: “Few have been able to exact, both physically and mentally, such mesmeric control on a match from one penalty area to another.”

Cruyff also perfected a move now known as the “Cruyff Turn.” To do this move, Cruyff would look to pass or cross the ball. However, instead of kicking it, he would drag the ball behind his planted foot with the inside of his other foot and turn through 180 degrees and accelerate away outside a defender.