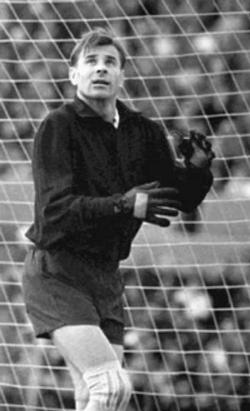 Lev Ivanovich Yashin was born on 22nd of October 1929 and was a Russian, Soviet football goalkeeper, considered by many to be the greatest goalkeeper in the history of the game. Lev is known for his superior athleticism in goal, imposing stature, amazing reflex saves and inventing the idea of goalkeeper sweeping. He was voted the best goalkeeper of the 20th century by the IFFHS.

Yashin was born in Moscow into a family of industrial workers. When he was twelve years old, the Second World War forced him to turn to factory work to aid in the war effort. He was sent to work in a military factory in Moscow, where he played for its football team. It was there that he was spotted and invited to join the Dynamo Moscow youth team.

He spent his entire professional football career with Dynamo Moscow, from 1949 to 1971,making 326 appearances for the club. He won the USSR football championship five times and the USSR Cup three times. Yashin’s club team-mate, rival and mentor was Alexei ‘Tiger’ Khomich, the keeper of the Soviet national team, who had become famous for his role in Dynamo Moscow’s British tour.

Lev Yashin is the only goalkeeper ever to win the European Footballer of the Year Award (1963). He is also believed to have stopped around 150 penalty kicks during his career; far more than any other goalkeeper in history. When asked what his secret was, he would reply that the trick was “to have a smoke to calm your nerves, then toss back a strong drink to tone your muscles.”

One of his best performances was the 1963 FA Centenary match, when he appeared in the ‘Rest of the World XI’ against England at Wembley Stadium and made a number of breathtaking and almost unbelievable saves. Known all over the world as the “Black Spider” for his distinctive all-black outfit, and because it seemed like he had eight arms to save almost everything. But to his fans he was always the fearless “Black Panther”. He often played wearing a cloth cap of burnt-brick color.

For his outstanding service to the people and to his country, Yashin was awarded the Order of Lenin in 1967, the highest award of the USSR. After retiring from playing Yashin spent almost 20 years in various administrative positions at Dynamo Moscow. A Bronze statue of Lev Yashin was erected at the Dinamo Stadium in Moscow.

Lev Yashin died in 1990 of complications caused by an amputation of one of his legs following a knee injury in 1986.

Still, his reputation as a brilliant keeper, a true sportsman, and an innovator of the game lives on. Yashin would always organize the defensive game of his team, often so fiercely that even his wife accused him of yelling too much on the pitch.