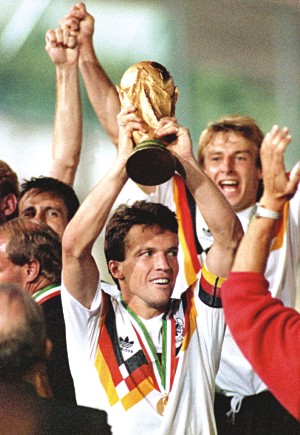 He is the most capped German player of all time, retiring with a total of 150 appearances (83 of them when the team was called West Germany) and 23 goals for the German national team.

Matthäus is a member of the FIFA 100 – a list of 125 of the greatest living football players chosen by Pelé. Maradona said about Matthäus “he is the best rival I’ve ever had. I guess that’s enough to define him” in his book Yo soy el Diego (I am the Diego).

During his career, he usually played as an Attacking Midfielder or Defensive Midfielder, although later in his career he played as a Sweeper. He was renowned for his perceptive passing, positional sense, and well-timed tackling, as well as his explosive shot.