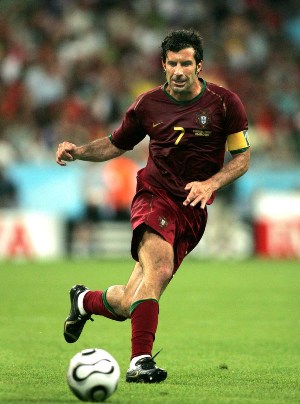 Luís Filipe Madeira Caeiro Figo was born on the 4th of November 1972 in Almada,Portugal and is a former Portuguese footballer who played as a midfielder for Sporting Clube de Portugal, FC Barcelona, Real Madrid, and Internazionale during a career which spans over 20 years.

Figo retired from football on 31 May 2009. He won 127 caps for the Portuguese national football team.

He has also won the 2000 Golden Ball (Ballon d’Or) award and the 2001 FIFA World Player of the Year award. Figo collected 127 caps with the Portuguese national team.

Figo is married to Swedish model Helen Svedin. They met at a flamenco show and are now married with three daughters.They are currently expecting their fourth child.