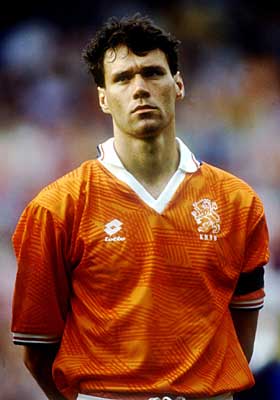 Marcel “Marco” van Basten was born on the 31st of October 1964 and is a Dutch football manager and former head coach of Eredivisie side AFC Ajax and the Dutch national team. Previously, he was a football player who played for Ajax and A.C. Milan in the 1980s and early 1990s.

He is regarded as one of the best strikers of all time and scored 277 goals in a career cut short by injury. Known for his strength on the ball, his tactical awareness and spectacular strikes and volleys, van Basten was named European Footballer of the Year three times (1988, ’89 and ’92) and FIFA World Player of the Year in 1992.

Van Basten was also voted eighth in a poll organised by the French weekly magazine France Football consulting their former Ballon d’Or winners to elect the Football Player of the Century.