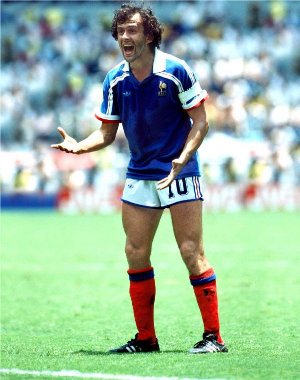 Michel François Platini was born on June 21st, 1955 in Jœuf, France, and was a French international football player, manager and current president of the Union of European Football Associations.

Platini was a member of the French national team that won the 1984 European Championship, a tournament in which he was voted the best player and top goalscorer. He participated in the 1978, 1982 and 1986 World Cups, reaching the semi-finals in the latter two.

Platini, Alain Giresse, Luis Fernández and Jean Tigana together made up the “carré magique” (French for “magic square”), the group of midfield players that formed the heart of the French national team throughout the 1980s.

He is also widely regarded as one of the best passers in football history as well as one of history’s greatest free kick specialists and finishers. He holds the record for most goals (9) scored in European Championship final tournaments despite only appearing in one such tournament (1984).

Despite being a midfielder, he held the national team top scorer record until striker Thierry Henry surpassed the 41 goals mark in 2008.

Platini was named Chevalier (Knight) of the Legion of Honour on April 29, 1985 and became Officier (Officer) in 1988. He was the French national team coach for four years, and was the co-organizer of the 1998 World Cup in France.

He has also been the chairman of the FIFA Technical and Development Committee, and vice-president of the French Football Federation.