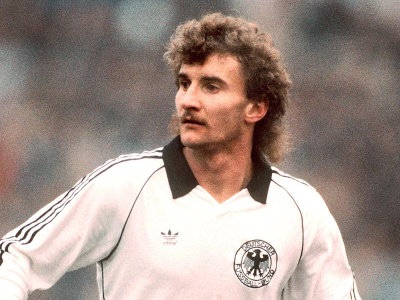 Rudolf ‘Rudi’ Völler was born on the 13th of April 1960 in Hanau, Hesse and is a former German international football striker, and a former manager of the German national team. He won the FIFA World Cup in 1990 as a player and coached the national team to second place at the 2002 World Cup.

Völler, joined the Bundesliga team Werder Bremen in 1982, winning his first cap for Germany in the same year. In 1987 he was transferred to A.S. Roma, where he became a mainstay of the team and earned the nickname ‘il tedesco volante’ (the flying German). He won the Italian Cup in 1991.

In 1992, Völler joined Olympique Marseille, winning the Champions League with this team in 1993. Returning to Germany, he joined Bayer Leverkusen in 1994, where he ended his career as a player in 1996 and started a career in the management of the club.

Völler was capped 90 times for the national team, scoring 47 goals, including 8 in World Cup finals matches. He was a member of the team that won the 1990 World Cup. He scored 3 times in the tournament, including one goal in a 4-1 win over Yugoslavia, and then found the net twice against the United Arab Eimirates in a 5-1 win.

Among German fans, Völler earned himself the affectionate nickname “Tante Käthe” (“Aunt Katie”) due to his curly grey “auntie” hairdo.


Atletico Madrid Could Be Forced To Sell Sergio Aguero