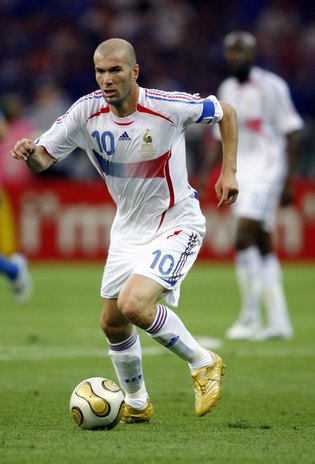 Zinedine Yazid Zidane, popularly nicknamed Zizou, is a retired French football midfielder. He played professionally in France, Italy, and Spain, and was a member of the French national team. His career accomplishments include helping France win the 1998 FIFA World Cup and Euro 2000, in addition to winning the 2002 UEFA Champions League with Real Madrid.

One of only two three-time FIFA World Player of the Year winners (Ronaldo being the other), Zidane was also named the European Footballer of the Year in 1998. Zidane’s abilities were further recognized in 2004 when he was included in Pelé’s choice list of the world’s greatest footballers. He retired from professional football after the 2006 FIFA World Cup.

Zidane has played a total of 506 professional matches in his career and scored 95 times in all competition.