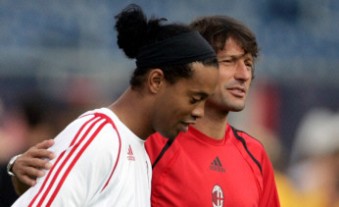 Interesting football news are out and it has been reported that AC Milan coach Leonardo is ready to axe Brazilian superstar Ronaldinho for their Champions League clash with Olympique Marseille.

After their 0-0 draw at Livorno and Ronaldinho’s disappointing performance, Leonardo knows, that with morale on a knife-edge, AC Milan cannot afford another poor result against Marseille.

Local Italian newspapers have reported that Leonardo will drop Ronaldinho for the game and field Clarence Seedorf behind the strike-pairing of Alexandre Pato and Pippo Inzaghi.

This will be a massive decision by Leonardo, who had been partly appointed coach this season due to his close relationship with Ronaldinho. Even though his job is not on the line, Leonardo knows that a defeat would deal a devastating psychological blow to his squad.

Leonardo told reporters last night that if Ronaldinho is training well and if he really wants to, he can make a difference for AC Milan.