Lescott Disappointed With Comments Made By David Moyes 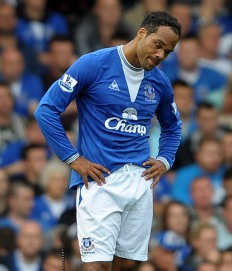 New Manchester City signing Joleon Lescott said he was “disappointed” with some of David Moyes’ comments prior to his departure from Everton.

The defender joined City late on Tuesday night for a fee in the region of £22m which made him the second most expensive British defender of all time and bringing to an end a transfer saga that grew increasingly embittered as Moyes criticised City for their conduct in pursuing Lescott.

The Toffees manger also claimed that Lescott had displayed a “poor attitude” when dropping him for the club’s Europa League victory over Sigma Olomouc and that the defender had “disappointed his team-mates” by focusing on a move to City.

But Lescott disagrees with his former manager’s assessment, even if he concedes that he was below par in Everton’s opening day 6-1 defeat at the hands of Arsenal.

Lescott said that he was disappointed with the comments made by Moyes as he feels that they are inaccurate. He added that he would like to address them at a later date and talk more positively about his move to Manchester City.

Lescott also said that he does not think that he disrespected any of the players and he apologise if he did. He also added that he would like to think that the players thought he gave his all when he played. He also said that he knew the match against Arsenal wasn’t my finest game for Everton and that it was a collective effort and obviously Arsenal were better than Everton on the day.’

Meanwhile, former Everton team-mate Tony Hibbert says Lescott’s departure is a blow to a club that are hoping to secure a European finish this season.

Hibbert also went on to say that it is just one of those things when players come and players go, and that is football really. He also said that you have friends but the next minute they can go and that the players at Everton have just got to get over it.’

Anderson Wants To Stay On And Fight For A Place