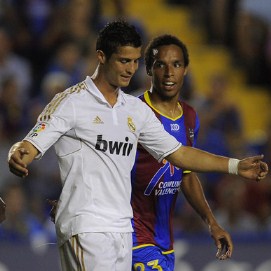 Levante clinched a historic 1-0 victory over 10-man Real Madrid to stun the La Liga giants in their hot-headed clash at the Ciudad de Valencia.

The hosts appeared to set out to simply rile and constantly chastise their opponents with Juanfran adopting the role of chief antagonist, but it was Sami Khedira who was shown two of eight first-half yellow cards and dismissed before the break.

Jose Mourinho’s side were left to bemoan two vociferous and legitimate penalty appeals being turned down by the referee, but it was Levante who struck the killer blow as Arouna Kone scored following a counter attack in the 68th minute.

Real Madrid’s in-form star Cristiano Ronaldo was confined to the substitutes’ bench due to the ankle injury he picked up during the midweek Champions League win over Dinamo Zagreb, but Sami Khedira returned to assume a midfield berth, while Kaka made his first La Liga start of the season.