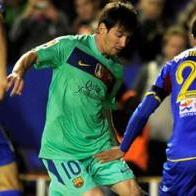 Barcelona rode an almighty scare as Lionel Messi joined Cristiano Ronaldo on the 41-goal mark this season with a 2-1 win at Levante, their 11th in a row.

Jose Barkero’s penalty midway through the first half saw the Champions League chasing minnows lead until well after the hour mark, when a superb goal from Messi levelled the tie.

Barca, who had been poor, won the match when Messi converted a highly contentious penalty, awarded when the assistant referee decided Issac Cuenca had been fouled by Pedro Botelho when the visiting winger appeared to trip the Levante defender.

The result sees Barca keep the gap from leaders Real Madrid at four points ahead of next week’s Clasico, while Levante suffered a blow in their chase to qualify for the Champions League, sitting fifth after defeat.