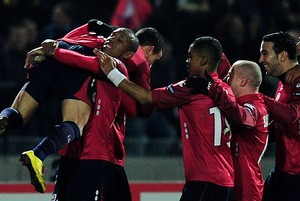 Lille winger Eden Hazard’s late goal inflicted Liverpool’s first defeat on French soil in six visits and left Rafael Benitez’s side with an uphill battle to make the quarter-finals of the Europa League.

The visitors appeared to have survived a testing examination by Les Dogues only for Hazard, who had been a threat all night, to curl in an 85th-minute free-kick.

Despite being territorially dominated Liverpool had the best two chances with Ryan Babel shooting too close to Mickael Landreau and Fernando Torres’ header being brilliantly saved by the goalkeeper in the first half.

However, the scoreline was no real surprise as The Mastiffs, as Lille are known, had scored in 20 of their previous 21 games at the Lille Metropole.

Their impressive record has seen them lose just once at home in Ligue 1 since the opening day of the season on August 9, with only one defeat in 17 home European fixtures.