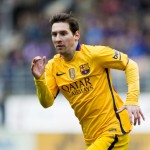 Reports are out claiming that Lionel Messi says Barcelona will not be underestimating Champions League opponents Arsenal.

The Gunners trail 2-0 ahead of Wednesday night’s return leg at the Nou Camp, after Messi scored twice at the Emirates, but not only has he praised Arsenal, he believes they have what it takes to overturn the deficit and progress to the quarter-finals.

“Arsenal have players more than capable of scoring goals,” he said.

“We have put ourselves in a very good position to progress and to reach the quarter-finals but none of the players are thinking that the job is finished.

“Of course we know the danger that Alexis Sanchez can bring but that is only one of many top quality players they have. The style they play is the most similar to that which we play at Barcelona and for that we have a lot of respect for them.”