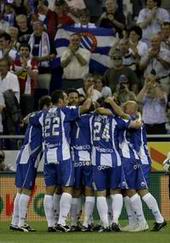 Liverpool suffered a shock 3-0 defeat against Espanyol in the first match played at the new Estadi Cornella El Prat.

A double strike from former Chelsea forward Ben Sahar (pictured) and a first-half effort from Luis Garcia sealed the win, but Liverpool’s Steven Gerrard twice hit the woodwork.
The clash was played in front of a noisy sell-out 40,000 crowd as the city of Barcelona marked the opening of the new stadium.
Reds skipper Gerrard had the first real opportunity with 19 minutes gone when he let fly with an effort from 30 yards.
The strike beat keeper Carlos Kameni but, frustratingly for Gerrard, the ball thudded on to the crossbar and away to safety.


Beckham To Work With The Terminator