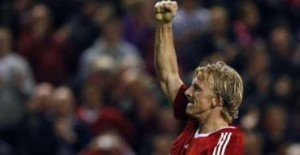 Liverpool made a lacklustre start to their Champions League campaign as a Dirk Kuyt goal on the stroke of half-time secured a 1-0 win over Debrecen.

The Hungarians were making their debut in the competition and it appeared as if Liverpool thought they would be easy prey as the Reds took an age to find their stride.

But for 10 minutes before half-time Liverpool produced some fluid football and were rewarded with Kuyt’s goal seconds before the interval.

The Liverpool juggernaut did not get out of neutral in the second half but Debrecen did not have enough quality to deny the Merseysiders their 100th win in the European Cup.