Liverpool, Everton To Do Battle For Dundee Attacker Ryan Gauld

Interesting transfer news are out claiming that Merseyside rivals Liverpool and Everton are getting set to do battle for the signature of Dundee United young gun Ryan Gauld. 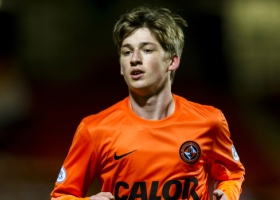 Football Direct News reported that the Reds and Toffees are showing considerable interest in the 18-year old attacking midfielder who is also a target for Tottenham.

Gauld recently penned a deal with the Taysiders which would keep him at Tannadice until 2017 but a source close to the player told FDN that the Premier League trio were all very keen on luring him across the border.

“We understand there could be offers from Liverpool, Tottenham and Everton,” the source revealed.

“Obviously it would be a tempting move for Ryan, but his priority for now is to keep playing regularly.”

Scotland U21 international Gauld, who has become a Tangerines regular this season, has also been watched by Manchester United and Manchester City in recent months.