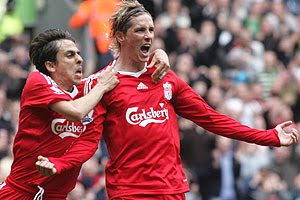 Premier League football news are out and it has been reported that Liverpool are sweating on an injury update from Spain after Fernando Torres was forced off in their clash with Armenia.

Torres appeared to be suffering a foot problem when he was replaced in Armenia, and Liverpool manager Rafael Benitez will be eagerly awaiting an update.

Before the end of October, Liverpool will be facing Sunderland and Fulham, as well as a home clash with arch-rivals Manchester United.

Liverpool will also take on French side Lyon at Anfield in the Champions League, and travel to Arsenal in the Carling Cup.

It was widely said that Liverpool would have pipped Manchester United to the title last season had Torres been fit throughout the campaign.

It is now believed that the Merseysiders are desperate for the Spanish striker to be fit from now until next May.

Cristiano Ronaldo Out Injured For 3 To 4 Weeks


Barcelona Ahead Of Manchester City To Sign Franck Ribery