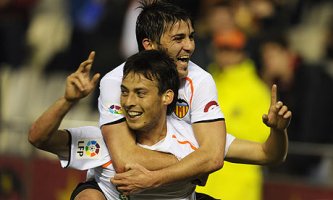 Sensational transfer news are out and it has been reported that English club Liverpool are stepping up plans to sign Valencia winger and Spanish international David Silva.

Local newspapers have reported that Liverpool will intensify their efforts to sign Silva, the Valencia playmaker, with Xabi Alonso expected to complete a £32 million move to Real Madrid next week.

It is believed that the Spain midfielder is not expected to travel with the Liverpool squad for their pre-season tour to Asia tomorrow night.

It is also reported that Spanish side Real Sociedad, who sold Xabi Alonso for £10.5 million to Liverpool in August 2004, stands to receive 20 per cent of the transfer fee, but that agreement is scheduled to expire today.

Wenger To Deploy Walcott As Striker Next Season