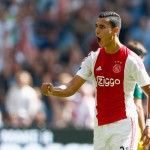 Reports are out claiming that Liverpool are in talks with Ajax winger Anwar El Ghazi.

El Ghazi has been a stand-out player for the Dutch side this season, scoring 11 goals in all competitions in 31 appearances.

It is said he’s attracted the interest of a number of top clubs including AC Milan, Manchester United and Liverpool.

And Italian transfer expert Gianluca Di Marzio says the Reds have stolen a march on Milan and their Premier League rivals and have begun negotiations with the winger.

The report says talks have started with Ajax and his agent Jorge Mendes and the forward is keen on a move to the England.

El Ghazi is under contract until 2019 and is expected to command a fee in the region of £12million.