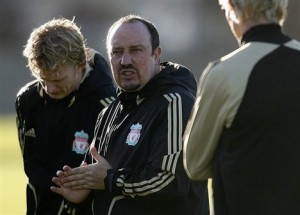 Liverpool manager Rafa Benitez insists that he has done his homework on Champions League new-boys Debrecen.

The Hungarian champions are making their debut at this stage of the competition and are unknown to most Benitez, believes that his side is fully prepared for their visit to Anfield tonight.

The Spaniard told reporters that Liverpool have been working hard, sending scouts to watch them and that he has a lot of information now.

Benitez added that Debrecen has got a very good striker with pace and a second striker with good ability. He also added that the wingers and the full-backs join the attack really well and the midfield have a lot of energy.

However Benitez added that it will be interesting to see what the team is like when they go head to head against a top team like Liverpool.

Benitez however said that the main thing now is for Liverpool to do well and if it does well, any team can be beaten. The manager also said that it is always important to take three points in every game especially when the team is playing at home.

Benitez also revealed that the players are all excited and that the Champions League is a massive trophy and it is always important to win trophies.

Benitez ended by saying that Liverpool have been close in the past and the club wants to be there again this season.