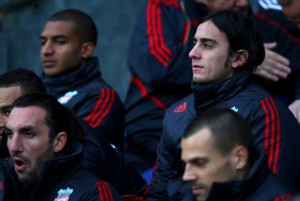 It has been talked about all season but Liverpool continue to remain patient with expensive midfield purchase Alberto Aquilani.

The £20million Italy international has managed less than 10 matches for the Reds since his switch from AS Roma in the summer, mainly because of injury, but manager Rafael Benitez admits his form was waned because he has been out of action for such a long period.

“When you have been injured for a while, it’s not easy for a player,” said Benitez.

“Then when you are available and the team isn’t doing well, it makes it even more difficult.

“You have to decide if you can afford to give him two or three games when you know he’s maybe not at the level he could be, so you could end up losing some of them.

“Alberto isn’t stupid. He knows the priority now has to be the team and what’s best for that. All he can do is keep training and making sure he is ready when we need him.”