Reports are out claiming that Liverpool are set to open talks with Real Madrid’s Denis Cheryshev. 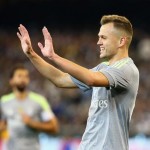 Fichajes.net suggests that Reds officials will sit down with Real in the next few weeks to discuss a potential loan deal for the Russian winger.

24-year-old Cheryshev spent last season on loan with Villarreal and impressed during his time at El Madrigal but has failed to become a regular under Rafa Benitez at the Santiago Bernie.

Cheryshev is reportedly frustrated by the fact he has made just five appearances in all competitions this season and is seeking a move in January in order to ensure his chances of playing for Russia at Euro2016.

The former Sevilla loanee made headlines on Wednesday for scoring in Real’s 3-1 Copa del Rey win over Cadiz despite the fact he had a one-match suspension to serve, stemming from his spell with Villarreal.

The Spanish giants face expulsion from the competition if found guilty of fielding an unregistered player.