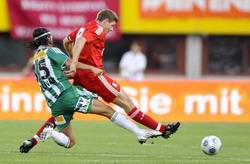 Liverpool slumped to a 1-0 defeat against Rapid Vienna in their latest pre-season friendly in Austria on Sunday night.

Rapid skipper Steffen Hofmann netted the only goal with a second half free-kick to see off a strong Reds side which included Steven Gerrard, Jamie Carragher and Yossi Benayoun.
Gerrard and Carragher played the first 45 minutes while Benayoun and Holland international Dirk Kuyt came on at the break as manager Rafael Benitez made a raft of changes.
England defender Glen Johnson was not part of the matchday squad, however, after Benitez opted not to risk him after he took a slight knock to his Achilles in Wednesday’s goalless draw against St Gallen.