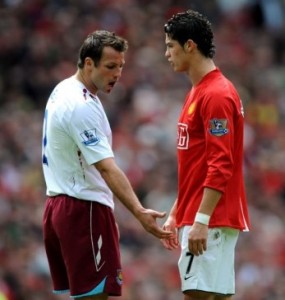 Interesting news from the Premier League is out and it has been reported that former West Ham United defender Lucas Neill is set to sign for Everton today.

The Australian international defender was at the club’s Finch Farm training complex this morning to undergo a medical.

Neill, now age 31, is a free agent after snubbing a new one-year deal at West Ham.

It is believed that defender Neill was pocketing around £70,000-a-week with the Hammers, who were only prepared to pay him half that amount this time around.

However, after holding talks with Sunderland and Atletico Madrid, he has opted to sign for David Moyes’ men and will earn around £40,000-a-week.

Neill is not eligible to play in the Europa League until January but his signing is a big boost for Moyes, who is without Phil Neville for at least three months, and Phil Jagielka until November.


Adebayor Reveals His Moment Of Madness