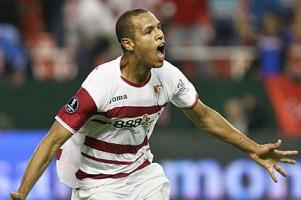 Sevilla striker Luis Fabiano has admitted that this could be his last season in Spain.

Manchester United, Manchester City and AC Milan have all shown an interest in the Brazilian international striker having seen him in action.

It is believed that all three clubs will welcome the Brazilian’s recent revelations, especially with his current contract coming to an end with Sevilla.

Fabiano told reporters that he will look at other offers when his contract ends because as a footballer it is important to look to profit from opportunities.

Fabiano came close to signing for Milan in the summer transfer window but the Serie A outfit failed to meet Sevilla’s £25million buy-out clause.

Although not ruling out a future move, Fabiano insists that, for the time being, he is concentrating on playing for Sevilla.

He added that he is happy in Sevilla and content with his position in the squad. He added that the 2010 World Cup is just around the corner and his dream is to play a part in the team.

Fabiano went on to say that he is very grateful to Sevilla for the chances given to him so far and that the club played a big part in helping him remain a part of the Brazilian national team.

Atletico Madrid Could Be Forced To Sell Sergio Aguero