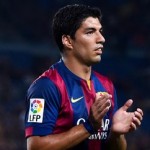 It has been reported that Luis Suarez is set to feature for Barcelona today against Indonesia U19.

The Uruguay international star has asked to play in Barcelona B’s friendly against Indonesia U19s on pitch 7 at the Ciudad Deportiva Joan Gamper stadium .

The former Liverpool star has only played a few minutes in the Gamper Trophy and is working towards getting in shape ahead of a possible return on October 25 when Barça face Real Madrid at the Santiago Bernabéu.

Suarez’s Barcelona progression will be broadcast live on television, on Barça TV and Esports 3.

Mario Balotelli : Manchester Derby Will Be Bigger Than The ‘El-Clasico’