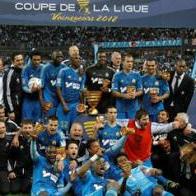 Brandao scored the only goal of the game seven minutes after coming on as a substitute in extra-time as Marseille won the Coupe de la Ligue for the third successive season with a narrow win over ten-man Lyon at the Stade de France.

The Brazilian struck with 15 minutes left as Marseille brought some respite to a miserable run with just their first win in 13 games.

For Brandao, it continued his fine record in the cup as he had also scored in the semi-final, the third year in a row he has struck at that stage.

For Lyon though, it was a disappointment, compounded by the sending off of Dejan Lovren two minutes from the end of injury time.