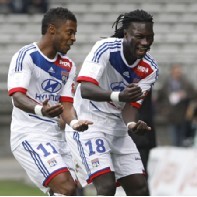 Michel Bastos continued his prolific start to the season as Lyon recorded their third win in four games to move top of Ligue 1.

The Brazilian started for the first time this season, having scored as a substitute in his two previous appearances, and was on the spot again after 17 minutes to cancel out Gil’s opener.

Bafetimbi Gomis, with a penalty, and Clement Grenier put the hosts 3-1 up and though Gregory Pujol pulled one back, it was Les Gones who took top spot rather than their fellow strong starters.