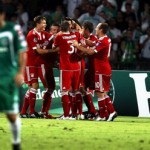 Two late goals by midfielder Thomas Mueller and one from defender Daniel van Buyten gave Bayern Munich a 3-0 win over Maccabi Haifa in a fast-paced Champions League Group A match in Tel Aviv on Tuesday.

Mueller’s strikes proved the breaking point for Haifa, who, even after van Buyten scored the first in the 64th minute, tried valiantly to make inroads into the Bayern defence and came close on two occasions.

Bayern dominated possession save for a 10-minute period at the beginning of the second half and it proved enough as the Germans eventually wore down Haifa’s tiring defence.