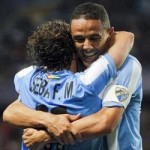 Malaga moved up to third spot in the Primera Division standings with a convincing 3-0 home victory over a Racing Santander side whose bid for some much-needed points at La Rosaleda was badly hit by the third-minute dismissal of defender Francis Perez.

Francis was sent off for bringing down Jose Salomon Rondon inside the area, and although Santi Cazorla missed the resulting penalty, Malaga still ran out easy winners thanks to goals from Alarcon Isco, Cazorla and Ruud van Nistelrooy.

The victory sees Manuel Pellegrini’s men move above Valencia and Levante into the top three, while for second-bottom Racing a sixth defeat in seven games leaves them seven points adrift of safety.