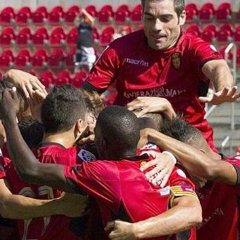 Real Mallorca’s fantastic start to the Primera Division season continued as they secured a 2-0 victory over Valencia.

Victor Casadesus fired the hosts into the lead after only seven minutes when his shot squeezed under Diego Alves, but the visitors went onto enjoy more of the ball for the rest of the half and were unlucky not to be level when Nelson Valdez’s header came crashing back off the underside of the bar.

Despite continued pressure from Valencia, Mallorca extended their lead on 55 minutes as Javier Arizmendi collected a Victor flick-on with his first touch before dispatching a volley low past Alves.

The victory continues the islanders’ unbeaten start to the season and their 100 per cent record at home but this was far from a straightforward win as Valencia dominated in almost every area bar the scoreline.