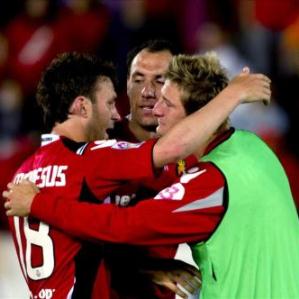 Sergio Aguero struck a hat-trick as Atletico Madrid gave departing coach Quique Sanchez Flores a winning farewell with a thrilling 4-3 victory over Real Mallorca, who escaped relegation by the skin of their teeth.

Despite Aguero’s heroics though, tonight’s victory was not enough to see Atletico secure their target of a top-six finish.

The Rojiblancos had already been guaranteed a spot in next season’s Europa League but were hoping to claim fifth or sixth place to enter the tournament proper.

As it was, with Sevilla and Athletic Bilbao also winning tonight, Atletico had to settle for seventh place and a place in the qualifying round.

For Mallorca, they will be playing top-flight football again next season – although they ended up finishing just a point above Deportivo La Coruna, who went down after losing 2-0 at home to Valencia.