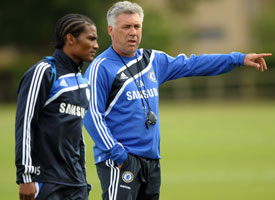 France international winger Florent Malouda has revealed that he is hoping that he can take his superb form from last season into this year’s Premier League campaign.

The Frenchman came performed well under stand-in boss Guus Huddink and played a starring role at Wembley in the Blues’ FA Cup final and semi-final victories.

Malouda, who joined Chelsea in July 2007, recently signed a fresh four-year deal ending speculation he would leave to play elsewhere in Europe.

Malouda, now age 28, told media that he is very happy because the club wanted him to sign, and for him it is the same so there is a big trust.

Under new boss Carlo Ancelotti, Malouda will be playing a much narrower role, giving England left-back Ashley Cole space to get forward.

Chelsea came up short in the race for the Premier League title last season and Malouda strongly believes that the Blues need to rediscover the home form which turned Stamford Bridge into a fortress under Jose Mourinho and Avram Grant.