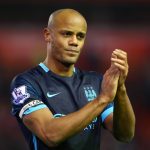 Vincent Kompany has declared that Manchester City will be perfectly motivated for Tuesday night’s Champions League semi-final with Real Madrid.

The Belgian international defender will lead his City side into battle with the Spanish giants in the first leg of the final four encounter at the Etihad Stadium and admits he and his teammates are hungry for success.

City are in the Champions League semis for the first time in their history and Kompany insists it is an occasions which should be fairly easy to get up for, considering what’s at stake.

“It’s massive,” said Kompany. “I have been through a very long process with this team.

“To play in the semi-final is in itself something really good but you want to go to the next stage now.

“It’s really good to be able to measure yourselves against a team like Real Madrid and seeing how far you have got after so many years.

“If we perform at the level we are capable of, it will be a fair game. That is what we hope for, especially as it is a first time for the club.

“For every single player in the team, if you are not hungry tomorrow, you will never be hungry in football.”