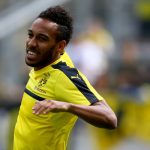 Reports are out claiming that Manchester City are eyeing a move for Borussia Dortmund striker Pierre-Emerick Aubameyang.

The Sunday Express claims that Aubameyang and Everton defender John Stones are the two big money targets City are now working on.

City have been linked with both players throughout the summer, but the two-time Premier League champions are yet to lodge an official bid for either man.

Everton have reportedly made it clear they won’t entertain any offers under the £50million mark for their 22-year-old defender, while Dortmund can command a hefty fee for Aubameyang, who was one of the hottest strikers in Europe last season.

City, however, face competition for Aubameyang’s services from Atletico Madrid, who have already had a bid for the Gabon international rejected.