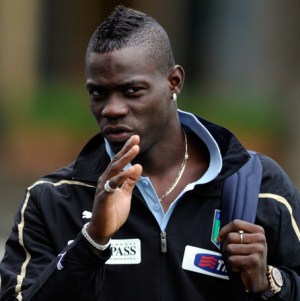 Manchester City firebrand Mario Balotelli has confirmed that he will not be leaving the Eastlands club in January as has been reported.

The 20-year old Italian international striker only joined City from Inter Milan in the summer but there is already speculation that Inter’s rivals, AC Milan, have held talks with the striker.

Balotelli was at the Milan derby last Sunday and was then spotted in a restaurant with AC vice-president Adriano Galliani but the pair have both denied that it was more than a mere catch up.

When quizzed on his current situation, Balotelli didn’t give much away but at least confirmed he would remain at Eastlands until the end of the season.

“The likelihood is that I will be at City up to June. I have a five-year contract and I can’t say anything,” he said.