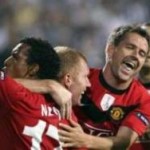 Paul Scholes popped up to head home the only goal of the game as Manchester United kicked off their Champions League campaign with a 1-0 win at Besiktas.

Besiktas may not be the force of recent seasons, but Istanbul is an intimidating place and United had to ride out a storm and keep the crowd in check.

That they did in polished style and were rewarded with the winning goal, Scholes’ 22nd in the Champions League, at a time when the crowd were roaring on the home side.

A win on the road in Europe is welcome at any time, but Sir Alex Ferguson is sure to be thrilled to have got this potential banana skin out of the way at the advent of the campaign.