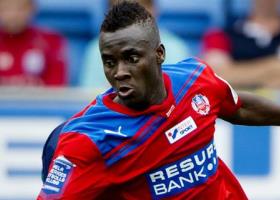 Reports are out claiming that Manchester United are watching Helsingborg striker David Accam.

Sportbladet revealed that United had scouts posted to watch the Ghanaian youngster in action against AIK.

Before the game, the 23 year old remarked on the United interest: “I cannot comment on that. I know that many teams are looking at me right now, but this is normal because I’m playing well. I am proud that the big clubs are looking at me.

“That means I’ve done something good.”

Accam’s deal with Helsingborgs runs to 2016. Arsenal and Everton have also made checks on the youngster this season.